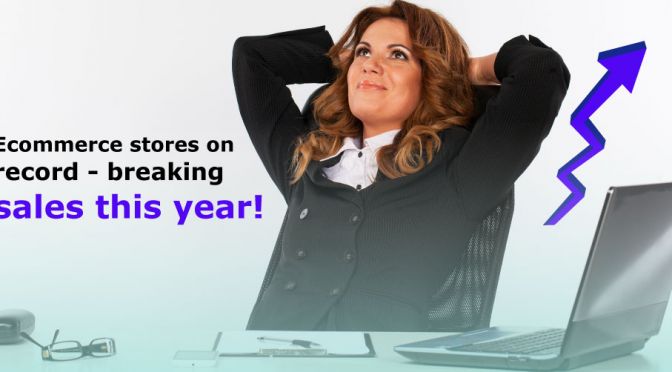 on track to hit $9.4 billion today, a figure that’s up 18.9% year-over-year, and even larger than Black Friday’s record-breaking $7.4 billion in online sales, according to analytics from Adobe.

Adobe’s forecasts and reports are based on over 1 trillion visits to U.S. online retail sites and 55 million SKUs. And its Adobe Analytics service is able to measure transactions from 80 of the top 100 U.S. retailers.

Since Black Friday, online and offline buyers and consumers spent $7.4 billion, including “Small Business Saturday” and “Super Sunday,”these terms are new terms for the big shopping days after Thanksgiving and Black Friday .

Adobe says Cyber Monday shoppers today can expect the biggest discounts on TVs (savings of 19%, on average), toys (20% savings) and computers (18% savings). Furniture and bedding, however, may be cheaper on Giving Tuesday (tomorrow), at 10% off.

Shoppers prefer to stay home to do shopping more and more

In addition to the usual factors that influence Cyber Monday sales, the shopping holiday may get a boost from the bad weather, too. When extreme weather arrives, shoppers tend to stay indoors and shop at home. On Black Friday, for example, states that recorded more than two inches of snow saw a 7% bump in online sales.

“Online shopping received some unexpected boosts this holiday season. Retailer fears of a shorter season meant that deals came much sooner than usual, and consumers took notice. In some areas of the country, adverse weather in the form of snow and heavy rain meant that many opted to stay home instead and grabbed the best deals online. Just look at Black Friday, which brought in $7.4 billion online and is just below last year’s Cyber Monday at $7.9 billion,” said Taylor Schreiner, principal analyst and head of Adobe Digital Insights.

“Consumers are reimagining what it means to shop during the holidays, with smartphones having a breakout season as well. We expect that consumers will spend $14 billion more this holiday season via their phones,” Schreiner added.

What does this mean for ecommerce stores?

It means that, more and more people prefer to stay at home to do their shopping online rather than go out shopping. And that will translate to a better sales in the future. Which makes sense considering the comfort of shopping online without the long lines and traffic jams!

This also means that having an ecommerce website for your business is necessary if you want to stay relevant today! The weekend shopping frenzy which accompanies Thanksgiving has now become an annual retail norm around the world. If you are not online, you are going to be left behind. You simple cannot afford not to have an ecommerce website for your retail business!

Adobe also notes that Cyber Monday’s four golden hours — 10 PM through 2 AM ET — will bring in 30% ($2.8 billion) of today’s revenue as shoppers show up to grab the deals before they end. During the peak hour of 11 PM ET to midnight, shoppers will spend $11 million per minute.

In today’s economy, a retail business cannot survive without an ecommerce website. Shoptech.media has been providing small businesses with ecommerce stores that are truly functional without reaching deep into our customers’ pocket. Contact us if you need help regarding development of your ecommerce store.