What does US Leaving UPU Mean for Your E-commerce Business 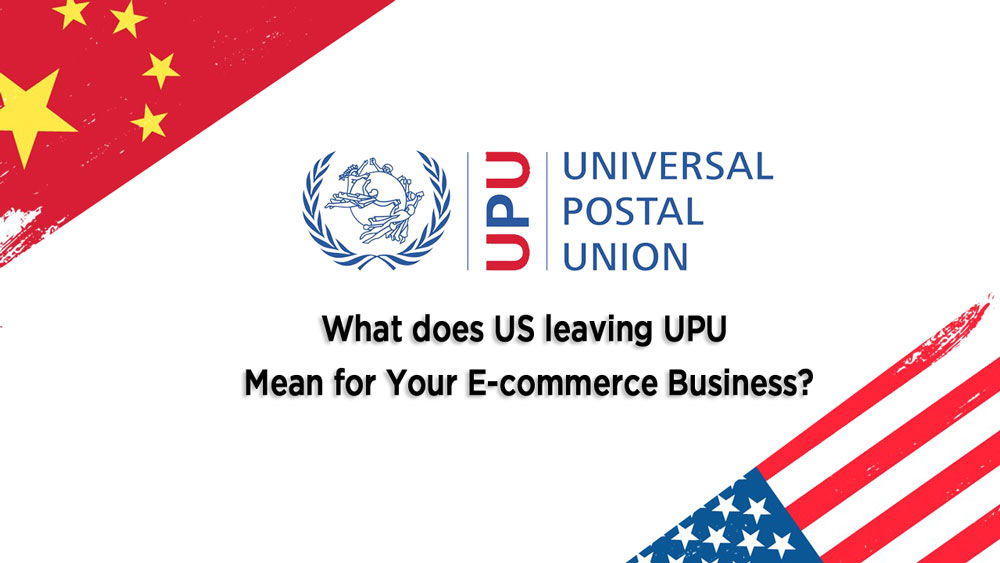 In more than 100 years, the Universal Postal Union (UPU) has not had a meeting as momentous as today. This time they meet to discuss US Leaving UPU. The UPU, a global organization backed by a treaty that sets shipping rates from country to country, has a Congress that meets every four years. But an extraordinary Congress meeting of the full 192-country membership only meets when two-thirds of the members agree to do so.

Update: Looks like things are looking up: U.S. Will Remain in Postal Treaty After Emergency Talks.
The agreement is that US can start setting up their shipping rates to compete with China in July of next year.

What is the reason for this meeting?

It is the U.S. withdrawal from the UPU which the Trump administration announced in October 2018, pending negotiations with the other members to form new bilateral and multilateral agreements.

The controversy centers around the contention that the UPU treaty makes it very easy and relatively cheap to ship any item under 4.4 pounds into the U.S. from other countries — so much so that U.S.-based shippers sometimes can’t compete.

National Association of Manufacturers (NAM) President and CEO Jay Timmons in a statement supporting the move back in October, said — — “This outdated arrangement contributes significantly to the flood of counterfeit goods and dangerous drugs that enter the country from China,”

As a result of this move, the United States Postal Service (USPS) sent email notices to organizations with negotiated service agreements (NSA) with USPS, warning the international rates in their contracts may be null on October 1  this year, that is exactly a week from today.

“We are making every effort to try to minimize any disruption that may be occasioned by this change and are working to devise solutions that promote continuity of operations, as well as alternative solutions for the future,” reads an email from a USPS official to an NSA holder dated Aug. 22, 2019.

The email states this further,

“Please note that your entity will no longer be eligible for discounted rates under the Agreement beginning on October 1, 2019, unless the Postal Service provides further notice regarding this matter to you,”.

While a USPS spokesperson did not confirm the notices, industry sources confirmed several other organizations with USPS service agreements received similar messages.

“The Postal Service is working closely with the State Department, the Postal Regulatory Commission and other stakeholders to implement self-declared rates. While the United States is preparing to leave the UPU in October. If a solution can be found that eliminates the economic distortion caused by the current terminal dues system on U.S. businesses, then the United States will continue its participation in the UPU”.

Glenn Gooding, president of iDrive Logistics, which has an NSA with USPS, told Supply Chain Dive he expected changes to come with the UPU withdrawal, but the canceling out of existing negotiated rates is a surprise. NSAs are generally negotiated yearly and often in January after the holiday shopping season has ended. These abrupt changes could hit shippers right at the start of peak season for e-commerce.

The situation surrounding the UPU contains echoes of the trade war with China. The UPU rates certainly need reform — they were conceived before China industrialized and became the manufacturing power house it is today. But the hard-line, all-or-nothing approach by the Trump administration is likely to leave U.S. businesses in an uncertain environment at a key time.

While it is true that China has been having a free ride with UPU, and the concern for a fair and balance trade is imminent – the reason for the trade war – shippers from other countries are going to feel the weight of this decision too.

“USPS intends to keep our major international products and services for export,” but “geographic coverage” may change. “Rates changes are likely to follow the current, normal, annual cycle schedule unless costs increase significantly,” the slides read.

A USPS spokesperson told Supply Chain Dive, “Because the U.S. may no longer be a member of the UPU by mid-October 2019, the Postal Service is undertaking parallel efforts to ensure the continued exchange of international mail items even if the negotiations to remain in the UPU are unsuccessful. No matter the outcome with the UPU, the Postal Service is committed to remaining in the international mailing business.”

Who are the biggest hit with US Leaving UPU?

Shippers and postage sellers are very concerned. Amazon, which is flooded by cheap items from China is going to get hit really hard. EBay has even created a digital form letter for its sellers to send to their Congresspeople to advocate for staying in the UPU.

Bloomberg reported this, “The UPU specifically gives favorable terms to items shipped from developing countries weighing under 4.4 pounds, which has filled sites like eBay and Amazon with cheap clothing and other light-weight items at low prices with free shipping”.

What do we have to say about US Leaving UPU?

This move by the US is a double-edged sword. On one hand it will probably do a lot to stop the massive flood of ultra-cheap items being shipped individually from China. All that stuff you see on eBay for 99c with free shipping would stop pretty much immediately. That will create some demand and opportunity for domestic sellers in the US who are willing to wholesale batches of product from China for US resale.

On the other hand though anyone shipping out of the US after October 1st  could face some major business disruption.

And businesses who are shipping to the US, even if that country does have a fair and balanced agreement with the USPS, prices are still going to go up both ways.

Likewise anyone who has a business that involves drop-shipping items from China is probably going to face a LOT of business disruption. Dropshippers in particular are going to get hit really hard.

This will likely have knock-on effects to people who are in other countries, even if you don’t deal with the US at all. Depending on how things unfold the entire UPU system could end up being renegotiated, or in a worst case scenario the treaty could fall apart.

In conclusion: What does US Leaving UPU mean for Ecommerce website owners and managers?

Overall this seems like something everyone involved in ecommerce should be aware of. Not a whole lot we can do to prepare since it’s not yet clear exactly how things are going to unfold. Nothing like uncertainty and potential major business disruption in the last quarter of the year.

Let us know what you think? Was US leaving UPU a good move for them? Will this bring better sale and opportunity for your prestashop – thritybees ecommerce website  shipping to US? How about from US?

Update: Looks like things are looking up: U.S. Will Remain in Postal Treaty After Emergency Talks.

Find the best Developer for your Ecommerce Business!

*You could cancel any time.

I don't want to see this message again.